The run up to our posting to Islamabad wasn’t easy – we had a baby and a toddler, the baby got ill (gastroentiritis), she then developed some sort of exploding nappy syndrome…luckily at the last moment I remembered the doctor mentioning that gastroentiritis can lead to lactose intolerance in babies (and STUPIDLY I had given up breast feeding just before we were about to launch on an epic journey when not having to worry about her formula would have been one thing less to worry about)….

…so eventually we bought some lactose-free formula, the baby’s nappies stopped being quite so horrendously green and smelly, our bags were packed, we said our goodbyes to all and sundry and we set off to the airport, all of us packed together with about 6 large suitcases, two car-seats, a buggy and one of those huge nappy bags you have to take everywhere with you when you have any child under the age of about two.

We were lucky enough to be flying business class – these were still the days before the austerity cuts put an end to that (for us, at least). So check in and the period leading up to the flight was all relatively relaxed. We got on the plane, found our seats and settled in for what we thought would be a nice, straight-forward, A-to-B flight. 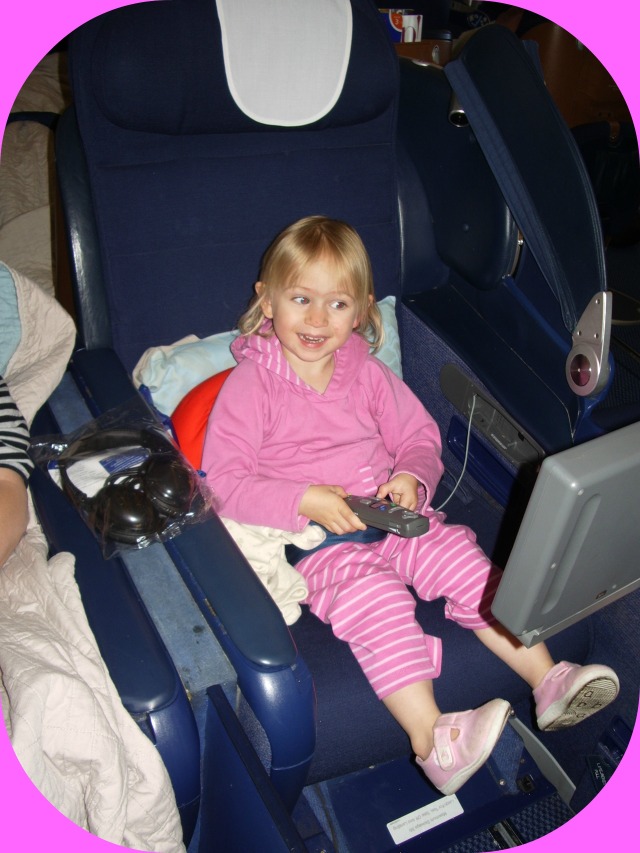 I can’t say the main part of the flight was fun. First the baby slept while the toddler was awake (see above – E, aged two, enjoying the best BA Business class has to offer). Then when the toddler finally feel asleep, it was the baby’s turn to wake. Still, I told myself as I paced the aisles bouncing a crotchety seven-month-old in my arms, it won’t be long until we’re there and we can all collapse into bed in our new house….

And we were nearly there. We were VERY nearly there. Unfortunately, we had been beaten to our destination by a very large thunderstorm. Which meant landing in Islamabad was going to be impossible. And since we couldn’t land in Karachi (security issues) or in Delhi (too many Pakistani’s on board – the Indians wouldn’t let them in) the only viable option open to us was to turn around and head for Dubai. Groan!

So the captain turned the plane around and back we went. This was annoying but we thought it would just be a blip. We were reassured that there would be BA ground staff waiting for us when we arrived in Dubai – they even made it sound like someone somewhere had a clue what they were doing. Ha ha ha ha ha.

When we landed in Dubai – one of the busiest airports in the world – it soon became clear that in fact no-one, not the Captain, nor the crew nor anyone at the airport had any idea of who we were, where we had come from or what to do with us. The plane wandered around aimlessly for a bit before finally finding somewhere to park. We were ushered off and taken on a bus first to one gate, then another. Eventually we were pointed inside the airport building and led around in a few circles. No-one went through any kind of security and I almost lost the toddler in the scrum. I screamed at her across the airport as she was about to disappear into a dense thicket of thawb’s, abaya’s, kameezes and dishdash’s….

Finally we found ourselves, plus some of our suitcases, on a bus to a hotel. Where there was a queue of fellow-passengers snaking around the room and to the door. We found some seats and made ourselves at home. While my husband and I took it in turns to queue, the children fell asleep…..

Now just to add some context here, the London to Islamabad flight was a night flight. We hadn’t managed to snatch more than a few minutes sleep before we arrived in Dubai – by which time it was some time the day after we originally took off. As for meals, I don’t think we had any idea as to what we should have eaten when. We’d gone through so many different time zones, and then back again, by this point that the only clue as to when it was time to eat was our grumbling stomachs. Unfortunately we were now in a country for which we had no relevant currency….

Eventually we were taken up to our hotel room where we were presented with one bed for the four of us….and certainly no such thing as a cot or anything safe for the baby to sleep in. Luckily, although the rest of us hadn’t had anything to eat in a while, I had packed some pouches of food for the baby (Ella’s Pouches – thoroughly recommended!) as well as some formula in little boxes (once again, why oh why had I stopped breastfeeding before this journey?), so she was able to eat. We were eventually presented with some tokens for the restaurant downstairs – where we managed to stuff the toddler with bread as there wasn’t much else that she recognised on offer.

So at this point we thought we would all at least be able to sleep while we waited for some news from the airline. However, if you remember a little further up the story, the children had slept while we waited to check in. And were now wide awake and full of beans. And jumping (well, the toddler was jumping, the baby was watching her) all over the room.

It was a dismal, dismal situation. We were stuck in a small hotel room in Dubai with no money, no information, no food and no sleep. And this is what the view out of the window looked like:

As the day wore on we started to get more and more desperate for information. I am sure our sleep deprivation, as well as all the accumulated stress from the weeks leading up to the move, wasn’t helping, but things were starting to get a little emotional. We tried calling the airline, but just kept being put through to the inevitable clueless call-centre operators. There was no-one from British Airways to be found, anywhere.

EVENTUALLY we were told a bus would take us back to the airport that evening and we would be put on a flight to Islamabad. The children fell asleep and we all managed to get a couple of hours kip, before we had to wake them up, bath them and get them ready for the next leg of our seemingly never-ending journey.

We didn’t want to stand in any more lines so changed enough money for a taxi to get us to the airport and thus one step ahead of our fellow passengers. We still had a three or four hour wait at the airport and I remember how interesting it was watching all the people in all their various different outfits – Dubai really is a true crossroads of the world. I was also starting to feel a little more benign towards our unwanted destination, now that we knew we were on our way out of it.

So the rest of the story is actually quite unremarkable. We got on the plane. It flew to Islamabad. We got off, entered Pakistan, were picked up by my husband’s predecessor, drove to our house on the diplomatic compound, found with huge relief that someone had turned the air-conditioning on….and collapsed into those beds we’d been dreaming of since before the u-turn over Islamabad. Our time in Pakistan was difficult, full of drama and short -lived. But despite this, the memories of that awful journey haunt me to this day.

This post is part of my memorable journeys series. Read the other posts in this series:

London to Cameroon via Moscow

A Step into the Unknown at Frankfurt Airport

Mongolian Airways to Khovd via Moron

And please don’t forget, if you have ever had a memorable journey and would like it to feature in this series let me know!

17 thoughts on “Memorable Journeys #5: London to Islamabad via Dubai (where we should never have been)”