The other day I had an online discussion with expat friend Vanessa who blogs at Petal and Mortar about some old tahini paste I have in my fridge. I really should have thrown this out quite a while ago, but Vanessa made me feel better by admitting that they had a jar of “neon peppermint sauce” which had followed them over FOUR separate moves.  And this made me think about the business of moving, upping sticks again every few years and all the things we have to decide to take or to leave behind, to keep or to throw away. And why some things come with us when, really, we should have thrown them away years ago.

In my case, it’s mainly spices. Living as we did in Pakistan for a few months back in 2008, one of the things that you could get there at a ridicuously cheap price was fresh spices. And good ones too, none of your namby-bamby supermarket stuff. When we realised we had to leave, we stocked up – big time. Unfortunately, though, what we hadn’t realised is that when you leave a country where you eat in a certain way, your eating habits tend to change as well. So we had the spices for them, but curries stopped being quite such a major part of our lives. So we still have some of those spices. Seven years later. 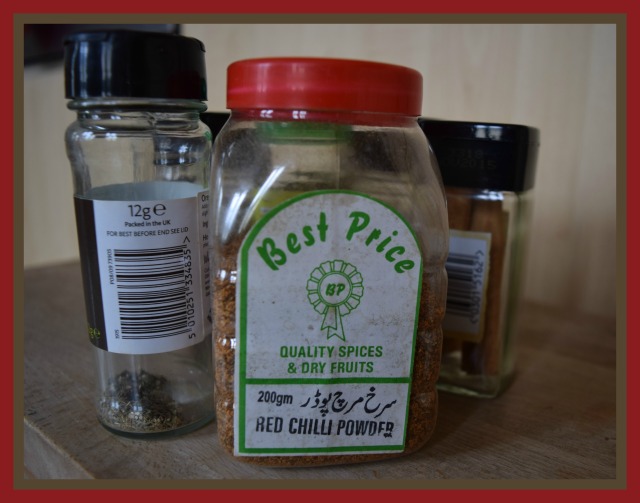 We’re now getting to that part of our last months in the UK when every time I go shopping I have to stop and think – will we be able to finish this before we leave for South Africa? And if not, will we be able to take it with us? I wanted to buy some balsamic glaze the other day (I know! How middle class!) but had to stop myself. Something like that would normally last us about two years. There is no way we would finish it in the three months we’ve got left here (yikes!). And it’s not something I would want to risk packing – the thought of balsamic glazed clothes and bedding doesn’t particularly appeal.

So we’re gradually running down our cupboards, until we get to the point when we’re having to think what on earth we’re going to make with the three remaining ingredients (frozen blackberries, the above-mentioned tahini paste, an old jar of jerk sauce……), like some sort of cooking show for expatriating families. Perhaps I should introduce it as a concept to the BBC?

But at some point we’ll have to decide what comes and what goes. Do we risk taking un-opened jars of food? What about that packet of kulfi I bought in our experimental Indian Cooking period about 18 months ago and STILL haven’t got round to trying? Will that make the cut? And what about those wretched Pakistani spices – so old now their flavour must have totally faded, leaving them a mere memory of their former, mouth burning selves? Do we bring them, for old-time sakes? Shall we keep them as an ongoing souvenir of our short stay on the sub-continent – or is it time to say enough is enough and send them the same way as the tahini paste and the half-finished, six-month old salsa (it’s amazing what you find at the back of your fridge when you move house).

To be honest, I haven’t decided yet. I suspect it will depend on how sentimental I’m feeling when it comes to time to pack. But one thing I am sure of. There’ll be more strange foodstuffs in our baggage on the return journey. Which, no doubt, will still be there four years later….

What’s in your cupboard? Do you have anything left from living in another country which you really should have thrown out by now? Come on, fess up!

24 thoughts on “What’s in your cupboard (even after three overseas moves)?”