A few weeks ago I wrote this post about how we didn’t quite make it up on a planned hot air balloon ride. Well, the good news is that yesterday we finally went – and it was fabulous. I don’t want to write too much as I prefer to let the photos do the talking – but needless to say it was everything you would imagine it to be. Exciting, yet peaceful. Exhilarating, yet calming. The early morning start (3.30am to be precise) was the hardest thing about the whole day – that and then having tired, grumpy kids to keep entertained once we got back to Pretoria. But otherwise everything went very smoothly and we couldn’t really have asked for more.

After the ungodly wake up, we arrived at the meeting place (Kloofzicht Lodge) just as dawn was starting to break over the veld: 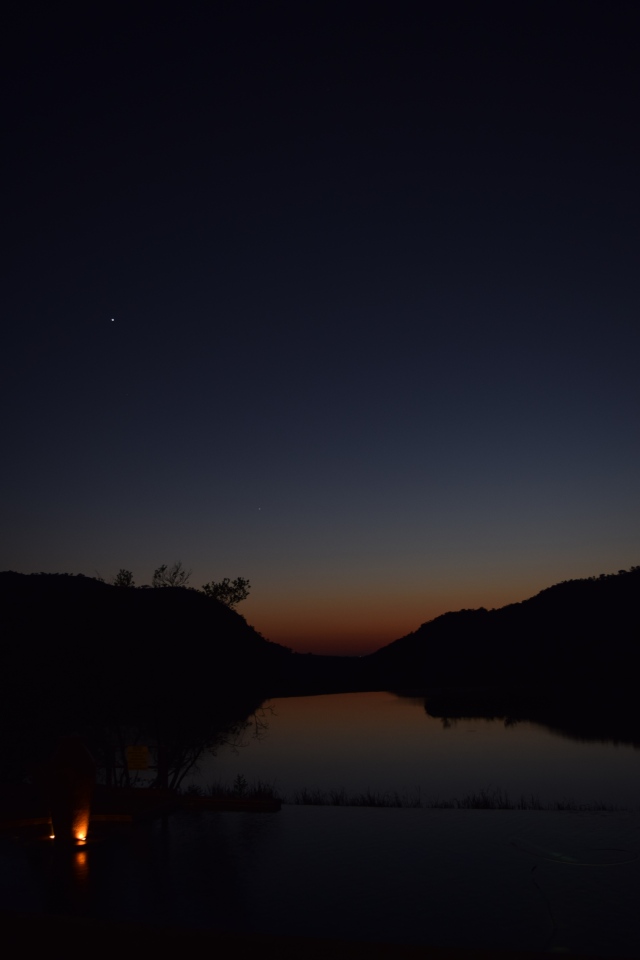 Luckily we were met with coffee and a friendly face, as the pilots and assistants from the ballooning company registered us and told us a bit about our flight. Apparently due to the possibility of strongish winds we would be flying from the “low reserves” rather than the “high reserves” – not that that meant anything to us. So long as we went up this time, we didn’t mind where we took off from!

Eventually everyone was gathered and we set off in a minibus to the launch site. Which turned out to be just in front of the hotel where we had met! We could actually have walked it but there again, it was pretty darned nippy. Temperatures in the daytime are getting up to the mid thirties here in South Africa at the moment. But before the sun rises it’s still very chilly – it was certainly a case of hats and gloves all round at that time of the day.

At the launch site, we were greeted with more coffee plus rusks – very welcome as it had been too early for any food before we left home. We were then able to observe first hand how the balloon was inflated, which was fascinating:

Finally the balloons (there were three flying that morning) were up and we were ready to go. Getting into the baskets was never going to be the most dignified experience, but once we were in we had a little cozy space with high barriers which made you feel very safe. This was particularly important for our youngest daughter who was getting very nervous about going up by this stage. Luckily there were little peek holes in the basket at lower levels so she was able to see out through those if she wanted to crouch down. She also had the class “pet” Crunchie the Crocodile to keep her company. I bet Crunchie couldn’t believe his luck when he found out he was going up in a balloon!

So, with a short safety advisory (which mostly revolved around what position to get into for landing and what to do if we ended up with the basket on its side), a bit of pushig and pulling from the balloon crew….and we were off!

The pilot skillfully navigated us through a gorge, the balloon so low at some points that we were practically skimming the trees. It was all done with wind direction and using the hot air blaster (I am sure there is a technical term for this…) but even when it looked like we were about to come crashing in to land she never blinked an eyelid. She was so calm throughout that I never felt anything but safe, which is strange when you think you are hundreds of feet up in the air with nothing but a bit of basket between you and the ground below…

Anyway once out of the gorge we soared over the land, spotting ostriches, zebras, cavorting wildebeest and even a surprised looking warthog below. It really was magical: 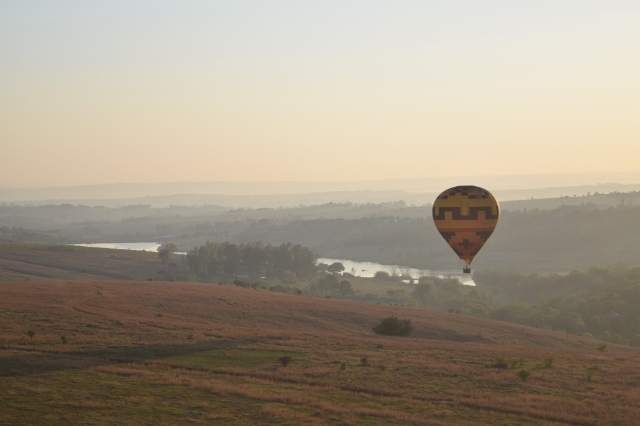 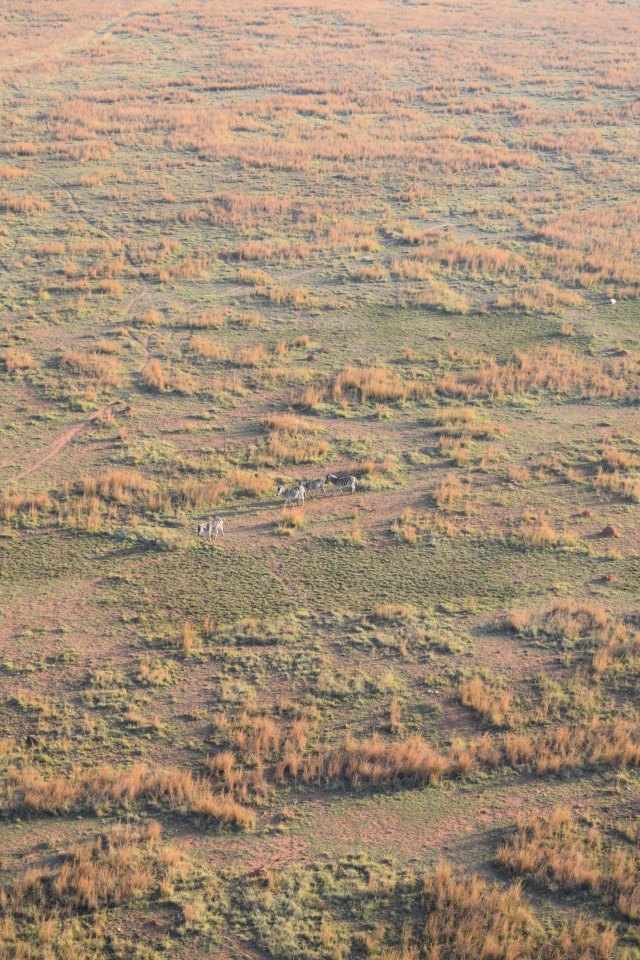 After about 45 minutes or so, by which time the sun was up and we were peeling off layers, the balloon did a loop around the hill to get back to more or less where we had started from (apparently it doesn’t always end this neatly – although I am sure the skill of the pilot was involved as much as luck 🙂 ). Drifting in towards the landing site we had a great view of the hotel where we started and the surrounding countryside:

And then we were down, and clambered ungracefully out of the basket to waiting champagne (and orange juice for the kids!). What a fantastic morning – and it was still only about 7.30am! We followed the ballooning with a big breakfast back at the lodge, and then, as it was still so early, decided to hop over to the Maropeng museum where the homo neledi exhibition is still on for another couple of weeks – having been extended due to the massive interest. On the way we passed the cutest family of warthogs which I can never resist – there is just something about warthogs and their tails: 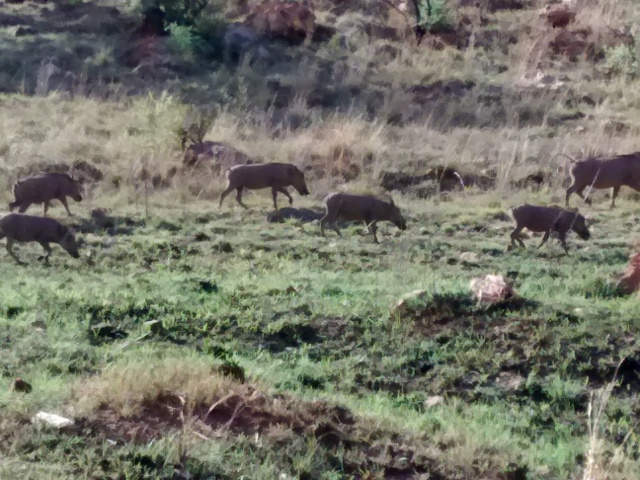 Having already been to the museum at Maropeng (which you can read about in my earlier post about our previous failed attempt to go up in the balloon), we walked right past all the exhibits and straight to see homo neledi. For those that don’t know, this is the exhibition of the fossils that were discovered right here in South Africa’s Cradle of Humankind a couple of years ago and announced last month to huge international interest. The fossils have yet to be dated but they are something very new to science and are thought to represent a new species related to humankind. If you want to find out more you can read about it here – but we felt incredibly privilidged to have visited the fossils in the very place they were found and, due to getting in to the exhibition so early, to have had them to ourselves for a few precious moments: 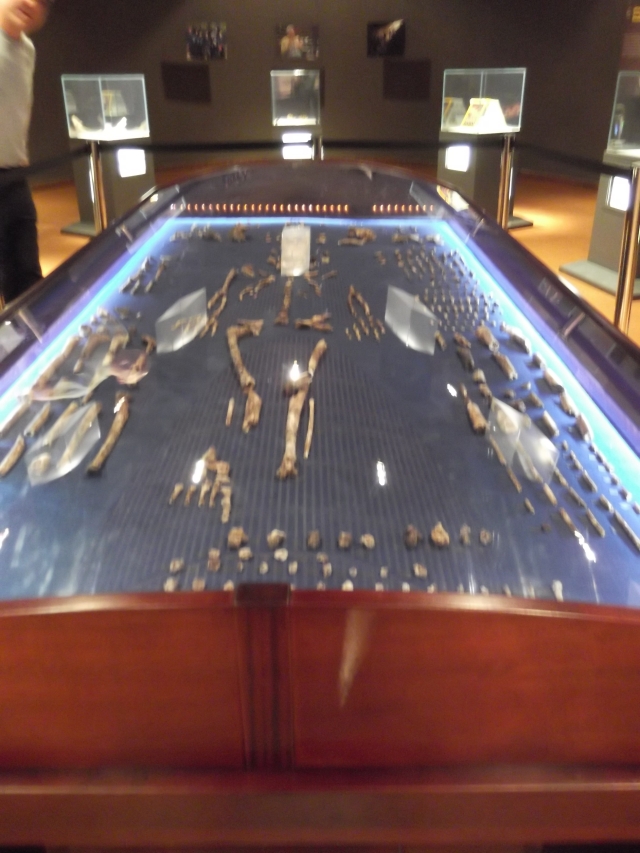 So all in all a great morning and exactly the sort of reason why we chose to leave behind our safe and happy lives at home in the UK and come to South Africa. I truly believe in grabbing every opportunity you get in this life and enjoying it. Here’s to the next adventure!

23 thoughts on “Up up and away…..an early morning balloon ride over the Cradle of Humankind.”