A few weeks ago I wrote a post about some of the “quirkier” aspects of South African life that I have grown to love. Or at least if not love then tolerate! As I said then, it is only when you are new to a country that you notice these things – so I thought I would get them down on the screen before the weird things became normal to me.

Anyway, having written one such post, I couldn’t help noticing more and more head-scratching things as I went about my daily life. That, combined with some of the suggestions I received in the comments section of my last post, has led me to decide I need to do a Quirky post part two. So here it is!

1. They wrap their trees in pink. Why? I have no idea! Obviously not ALL their trees, but at intervals around Pretoria you will find these pink wrapped trees, for no apparent reason. At first I thought it was an advert for a close-by boutique. But then I kept seeing more and more of them. I don’t recall seeing any in Cape Town or Johannesburg so perhaps it’s a Pretoria phenonemon. If anyone knows why they do this please let me know! 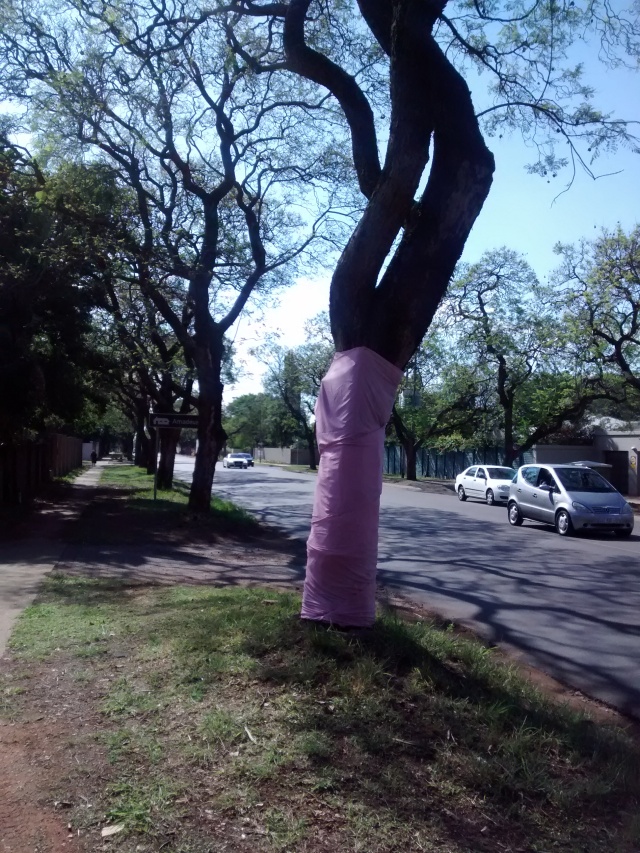 2. (As suggested by a reader) They employ people to stand at roadworks and wave red flags to slow people down. ALL DAY LONG. Boy do I feel sorry for these people. They must have the strongest arms in the world by the end of their shifts. But how boring must their job be! What goes through their heads? Do they count blue cars, white cars, cars with roof racks? Are they silently writing novels in their minds? I try and make myself feel better when I see these poor souls by thinking they are probably happy to have a job at all, and one they can do relatively easily. But all I feel is sympathy. Let’s just hope they are allowed to be rotated with some of the other roadwork people, like the ones that get to move the signs….

3. And in a similar vein – car guards! Men in high-viz jackets who hang around your cars and then hope you will pay them a few measly rand for “guarding” your car and then “helping” you to back out of a space (I am actually far more worried I am going to hit the car guards than hit another car when this happens). They also stand in the middle of the roads and desperately try and wave you down and get you to park in one of “their” spaces by the side of the road, even if you have no intention of parking any where at all at that particular point in time. Sometimes I feel like pulling in, parking, sitting in my car for a minute, giving them some change and then leaving just to make them happy.

4. Monkey-gland sauce. What is it? I have no idea and I have no intention of ever trying it! I am fairly sure it has never actually been near a monkey but there again….

5. And while we are on the subject of food, their obsession with bacon and banana on pizza. Actually it makes a lot of sense, after all, the sweet-salty combo can work very well: ham and pineapple, gammon and honey-glaze etc. But this one is totally new to us and somehow banana on a pizza? Hmmm, I am not sure – although my daughter tried it and seemed to like it… 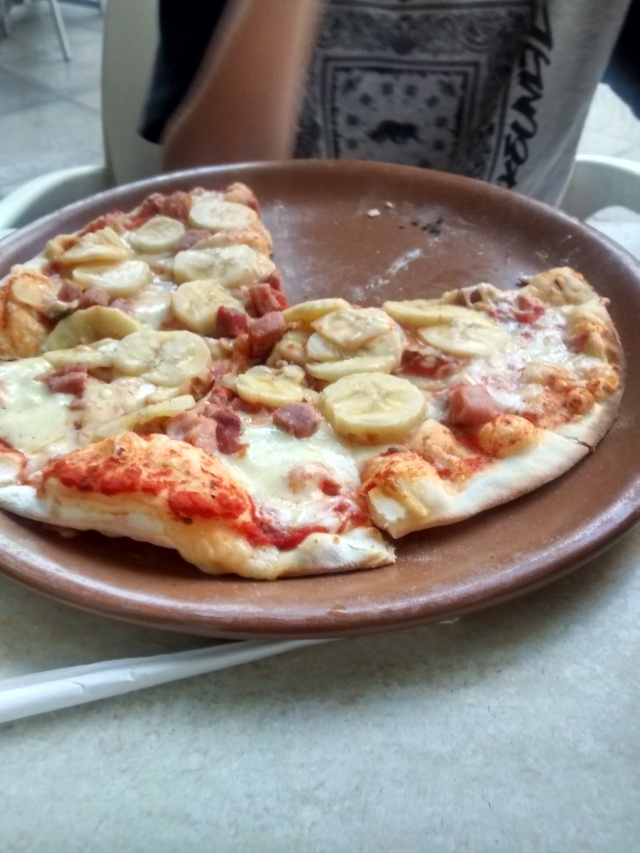 6. Impala poop spitting. Okay, I actually had to Google this one – it was suggested by fellow-blogger Joburg Expat who wrote her own blog post about it when she was living here. I still can’t quite believe it’s actually a thing but yes apparently do put pellets of dried impala poo (or Kudo poo, hopefully not human poo!) in their mouths and then spit it. Ok, that’s quirky!

7. Shoeless children. This isn’t confined just to South Africa but must be a southern hemisphere thing as I have also seen this in Australia and New Zealand. Children walking around bare foot all over the place – shops, malls, outside on the pavement, restaurants…and I’m not talking about children who look like they can’t afford shoes – these are well-dressed children who look like they come from affluent backgrounds. I was once on an expat forum (made up mostly of expats in Europe) where most people were horrifed by this idea that children would walk around in a city barefoot – wouldn’t it be dirty? Germs! Bloody feet! Filth!!! But actually I quite like it, it is one of the things that epitomises the laidbackness of this part of the world. My oldest daughter is also getting quite into it and tries to sneak out of the house barefoot as often as possible – although I do draw the line at sending them to school shoeless!

8. Feta cheese. Another obsession which I don’t really understand. Now I quite like feta, especially in salads (actually what else do you do with it?). But I can’t understand why roughly half of their cheese sections in the supermarkets is made up of cartons, packs and containers of the stuff. Slimline feta, black pepper feta, herby feta, goats feta, good-old-plain-and-simple feta….If you like feta, this is certainly the place to come! 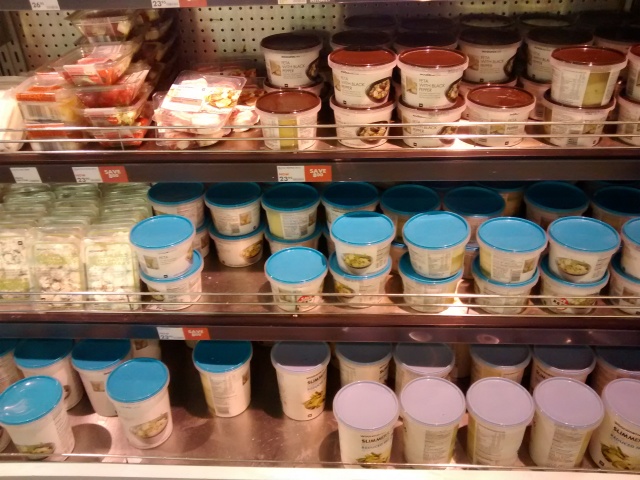 9. Four-way stops. Driving here is relatively easy, but it’s still different. And one of the most different things is the four-way stops. Basically this is what we would call a crossroads but where none of the roads are main roads, all the roads are equal. And no roundabout. So no way of knowing who has a right of way. Which means you all stop and then someone eventually goes forward. If you reach the stop line before anyone else then  it’s usually obvious that you go first. But it doesn’t always work this way. Sometimes I find someone else is there first and yet they wait for me to arrive and wave me through. Are they just being polite? Is there a rule  I still don’t understand? Can they just see I am a crazed non-South African (I drive with Diplomatic plates) and therefore know the likelihood is I will get it wrong if they leave it to me? Who knows!

10. The weather. Mostly the weather here seems to be A1. Hot, sunny but dry – not humid like I was used to in the Caribbean. But then they have these strange thunderstorms – massively loud thunder, lots of lightning and then…. no rain! Or if it does rain it lasts about three minutes. And although the storms are huge they don’t really last very long either – usually around 30-45 minutes. All very polite really. We also recently had an enormous hailstorm – it managed to miss us in Pretoria but the huge hailstones caused huge damage in other parts of the region. And when I say huge I mean it – think golf-ball size. This is why we always keep our cars undercover.

11. Flour. Alright another strange thing to get worked up about but in every other country I have ever lived in there has been plain four and there has been self-raising flour (bar Pakistan where there was no self-raising anything). Here there is self-raising flour and then there is something called “cake flour”. What is this? Is it plain flour? Well it will have to be as I need it to bake with. So far my baking efforts have worked out okay, but I’m still not convinced. Once again, answers to this one in the comments section please! 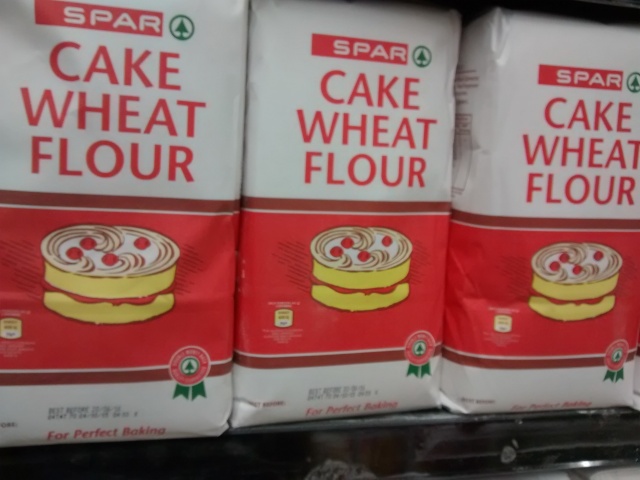 12. And finally, another reader suggestion: hadedas. I had never heard of these birds before coming to South Africa. Now you can’t get through a day without hearing them. Basically they are like little miniature pterodactyl’s – squawking birds with long beaks that seem to argue at the top of their lungs outside our bedrooms every morning. They really are the loudest birds I have ever heard – the even put seagulls to shame. But they are also part of the “South African” experience and I have heard many homesick South Africans lamenting them as they talk about what they miss from home. Yeah, okay, they are quite unique in their own way. I just wish they would turn the volume down a bit!

So that’s it for now, 12 more quirky things about South Africa to add to my original list. But what have I missed? Go on, add your comments below 🙂

PS An update on chorizo from my last quirky post: I think someone from Woolworths was reading as suddenly proper, Spanish chorizo has appeared in their shops here. Huzzah!

29 thoughts on “More quirky things I love about South Africa…” 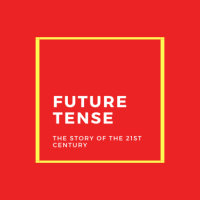