Welcome to the second in my Day in My Expat Life series – if you haven’t already done so, you can read the first (mine) here. In this post we hear from Natalie, a South African who now lives with her partner in Berlin, and blogs over at Middle Europe. I really enjoyed reading about Natalie’s life in Berlin – as someone who has two children, it sounds wonderfully relaxed! But so interesting too, to be cycling past the Berlin wall every day. And look at the size of those strawberries! Thank you for this glimpse into your Expat Life Natalie.

7:30: Good morning Berlin! I normally wake up to the sounds of roosters, birds or thunderstorms thanks to my fiancé’s phone alarm clock app. One of the first things I do upon getting up is check the weather, since it can be quite changeable. At the moment it’s warm and sunny with occasional thundershowers and rain. I never get tired of the view into the “Hinterhof” (back courtyard), because of all the trees. Many apartments in Berlin have a courtyard behind the building and in some there are even back buildings which you can enter from the courtyard. We are staying in my cousin’s “Altbau” apartment (meaning, built in the old style). 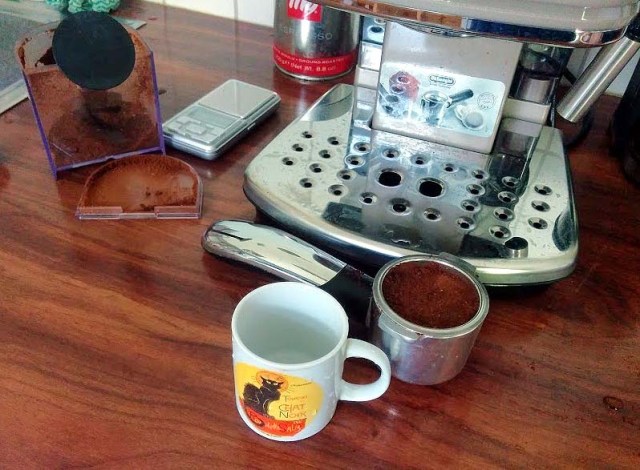 8:15: After showering and getting ready for work I normally have a coffee before I leave. My fiancé’s family gave him a coffee machine for Christmas as he is a big coffee aficionado. Before we used to use a mocha pot, which also made great coffee. I hadn’t seen them before moving to Berlin but it’s a metal jug with which you can make coffee on the stove. I’ve got into the habit of putting a half spoonful of condensed milk into my coffee here, mostly spurred on by the fact that you can buy mini cans of condensed milk from Russia in our local supermarket.

8:30 My fiancé often waters the plants in the morning. He planted a whole lot of tomatoes from seed and they have taken over our balcony. In Berlin our balcony is the garden and it’s nice to have this green spot, as not all apartments have balconies. It’s also pretty hard to find an apartment with a garden.

8:40: Time to leave for work, so I go downstairs to the courtyard which is also the bike parking place. Cycling is a popular mode of transport in Berlin. It’s often faster than the public transport , you can avoid the rush hour crowds on the trams and trains, and in general there are good cycle lanes. Bikes get stolen a lot in Berlin though (and probably in most cities) so wherever you take it you have to lock it to something. Which lock is the best is often the topic of lengthy discussions.

8:50: My ride to work always takes me past the Berlin wall. Yes, that is the ordinary grey wall in the background! The red path is the cycle lane, something which a lot of tourists don’t notice, and they walk into it. I used to do the same when I first arrived of course. It took a while to get used to the fact that there are many cyclists around (also when crossing the road). 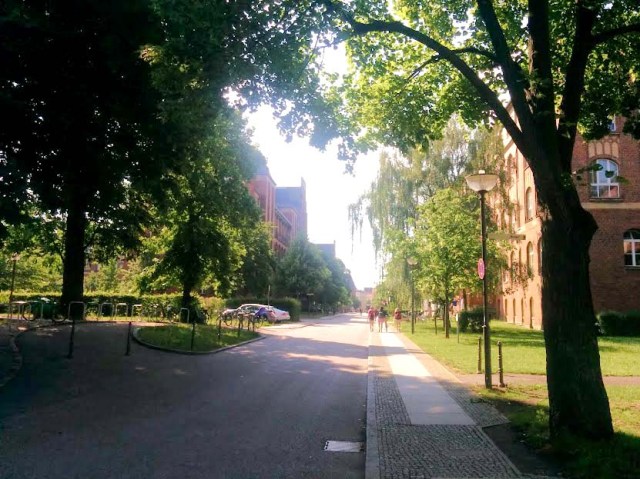 9:10: It only takes me 15-20 minutes to cycle to work, so before long I arrive on the Charite campus, where I work in a lab. Not all parts of Berlin are pretty, there’s also a lot of grey streets, graffiti and some ugly buildings, but there are definitely beautiful spots and I find Charite campus lovely, especially in spring when the leaves come back to the trees. Berlin has relatively a lot of green spots for a city. 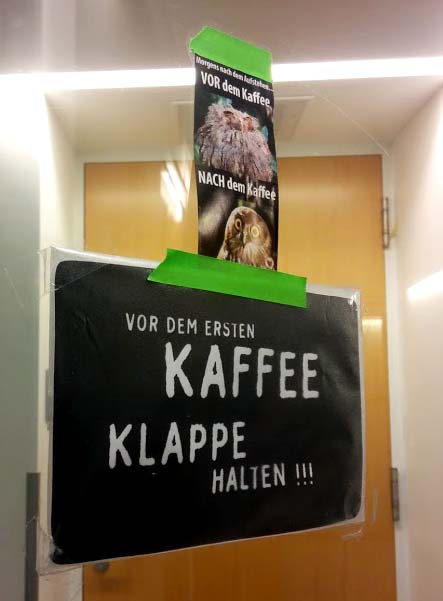 9:30: Time to go to the lab and do some work. This sign on the door amuses me. When I arrived I didn’t understand German, then later on I barely noticed the sign, but recently I noticed the words again and this time I understood it. It basically says: “Before the first coffee, keep your mouth shut!”. The reason I find it funny is that some of the staff can hardly crack a smile or return a greeting before coffee or lunch (although luckily the ones I sit next to are more friendly). When I first moved to Berlin I found it hard to get used to greetings not always being returned, as this would be considered extremely rude in South Africa. One of my German teachers told me it‘s the same at his workplace but that people are normally more friendly after the first coffee! 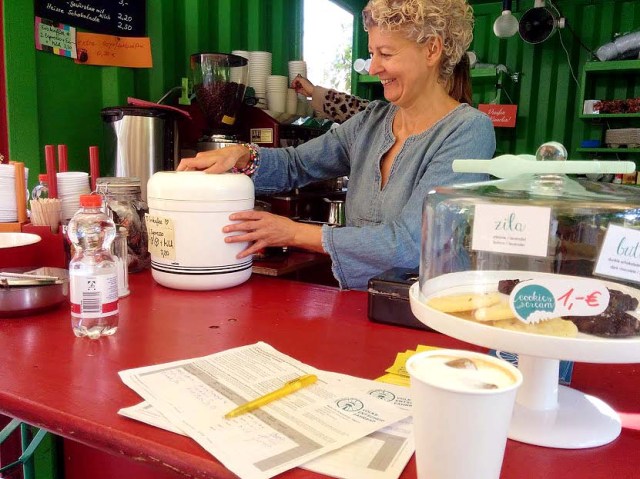 11:00. Time for a coffee break. A colleague friend and I often pop across to a coffee wagon on the nearby Humboldt campus grounds (which looks like a little park) as it’s good to get some fresh air and have a walk and their coffee is good. In summer they also serve ice coffee. By now they know us and some of the baristas ask “Wie immer?” (Same as always?) and occasionally even start making our coffee before we get to the stand, if it’s a busy day!

11:10: Also on the Charite campus are some ladies who sell fresh fruit, vegetables, eggs, honey and occasionally flowers and other things. They are probably from Brandenburg, the area surrounding Berlin, or from the outskirts of Berlin where it’ s possible to have more land. Their produce is generally very good so often we stop there to buy something. Everything is seasonal and it’s fun seeing what is there each week. Around Easter I was able to buy some blossom tree prunings to make an Easter tree. At the moment it’s strawberry season and before that it was asparagus time.

18:00: I forgot to take a photo at lunch, but lunch was pasta at our cafeteria as usual. We have an Italian man running it and his food is really tasty, so many of us regularly eat there. I think we have all put on weight since he took over our cafeteria. By 18:00 the lab is really quiet, especially so because the weather is good, it’s Friday, and people want to enjoy the warm, light evening. In general the lab technicians start and finish early and postdocs and PhDs start and finish later.

[Aside: Monday and Wednesday 19:30]: On Monday or Wednesday I’d be at work until 19:30 and then go directly to my German class, as it’s close to my work. Today is Friday so I have a free evening.

18:30: Today I have plans other than German class: we are meeting a friend at the Sony centre at Potsdamer Platz for a movie. Before leaving work I check the route on Google maps, which has been invaluable since I moved to Berlin. Especially when cycling, I need to know how to get there in advance.

19:00: I arrive at Potsdamer Platz near the Sony centre. Potsdamer Platz used to be a central entertainment area in the roaring 20’s, was bombed flat in the war and left deserted during the time of the Berlin wall. Now it is a newly built business district which also has fancy hotels, some museums and the Sony centre. As you can see, as with most places in Berlin there are bike parking places around. My bike is my new car.

19:30: After picking up the tickets that our friend has reserved, we head over to Vapiano’s for a quick bite to eat (it is sort of Italian fast food). The Potsdamer Platz area is not really known for restaurants. Vapiano’s is a restaurant chain that uses a card system: you order on a card and then pay for everything you have ordered afterwards at the till when you hand your card in. It’s all self-service.

20:30: Back to the Sony centre for our movie (the new X-men movie). They show original language movies at the Sony centre, so we can watch movies in English, which is always a treat. I don’t mind watching some movies in German, but in general it’s still more enjoyable for me in English. 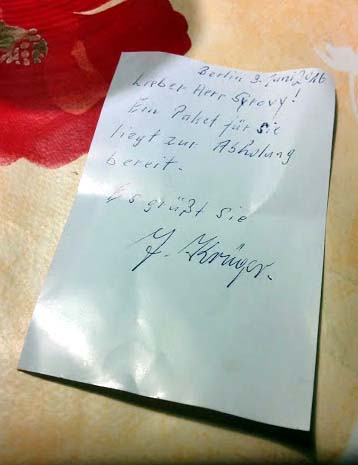 12:00am: We arrive home pretty late as the movie is long. Our friendly neighbour has left a message that a package has been delivered. In Berlin they have the interesting system that postmen deliver parcels and if you are not there they leave it with a neighbour. It’s quite convenient, especially since we have a nice elderly neighbour who often ends up looking after our packages. He has lived in this apartment block since before the Berlin wall and says he has been through two dictatorships (he was at school when Hitler was in power and also lived through the communist regime). It’s great to be able to hear stories from a local. 12:30am: time for bed! Normally we might watch something on Netflix before bed, but we’ve had our movie fix for the day. Now a sunny Berlin weekend lies ahead of us.

Thank you again to Natalie for featuring in this series. If you would like to show off a day in your Expat Life please get in touch – either leave a message in the comments section or email me clara@expatpartnersurvival.com.

6 thoughts on “A Day in My Expat Life: Berlin”