Hello and welcome to the first in the series of what I am calling a Summer of Guesting. A couple of weeks ago I put out a plea for guest posts from bloggers who write about expat life or travel to help get me through the next couple of months when the children will be off school and we will be moving to South Africa. I knew I was unlikely to have much time to write blog posts (and don’t have time at the moment to write more than a handful in advance), so had the idea to ask others to contribute. I thought I might get a couple – but was overwhelmed with offers! Thank you so much to everyone who has already sent me their posts, as well as those who are busily writing them as we speak (ah hem!).

Anyway, today’s guest blog comes from Sandra, of the Life and Whatnot blog. Sandra writes about learning a new language – something many of us expats have to contend with, whether we like it or not! But for Sandra, it wasn’t just any old langauage. No, it was Norwegian – one of those should I say slightly more complicated languages, one that I know I would dread having to try and get my tongue around. Over to you, Sandra!

Many years ago in kindergarten I was taught my ABCs. Those twenty six letters, I was told, could be mixed up and used in different ways to form the words I would need to navigate my way through the world. To make sense of things around me, to communicate with other people and be able to express all my thoughts and ideas.

And I did. I’m told I was quite the chatterbox when I was little and as the years went on I found I enjoyed writing stories about places and people that only existed in my imagination and reading books about animals and the stars in the sky.

Little did I know that decades later I would meet, fall ridiculously in love with, and marry a Norwegian. And my ABCs would find three new friends to play with. Æ, Ø and Å.

It can be a humbling experience when you start learning a new language and it was no different for me trying to learn Norwegian. I went from being able to express my thoughts and ideas with a rich and broad vocabulary to speaking short, simple sentences conveying the barest of information.

When I tried to follow conversations between my in-laws it was difficult to discern where one word ended and another began. Written Norwegian was a little bit easier as I could take my time and pick apart long compound words into their simpler component words.

When I moved to Norway and began Norwegian language classes (norskkurs) I, along with the rest of the class, was taught bokmål. Bokmål is the preferred written standard for the Norwegian language and is used by about 85 to 90% of the country. While bokmål, the written language, is regulated by the Norwegian Language Council, the pronunciation of words is free to change and shift according to local dialects. And that can cause problems for those of us new to the language as well as native Norwegians who find they can’t understand their new neighbor who happens to have grown up in Tromsø. Norway has an incredible number of different dialects. Understandable for a country with a population that for many years lived far away from each other and therefore each village and town developed their own dialect.

One of the requirements for residency here in Norway is completing a set number of hours of language/social studies instruction. For me that meant 550 hours of language classes and 50 hours learning about Norwegian society. I find Canada and Norway to be quite similar in many ways so the social studies class was a breeze.

And I was lucky to have two awesome Norwegian teachers. They were always ready to explain the intricacies of grammar and were willing to find me more challenging assignments when they felt I was progressing faster than the rest of the class. Tusen takk, Anne Thea and Trude!

Over the course of about nine months I went from tentatively telling people my name and where I was from to being able to speak more deeply about myself and my background, discuss current events in the news, and hold a conversation with a stranger. I was also able to take the Norwegian language test earlier and at a higher level than I had initially planned. And I’m not embarrassed to admit that the day I opened the two envelopes that confirmed I had passed both the written and oral portions of the exam I did a little dance around the house. 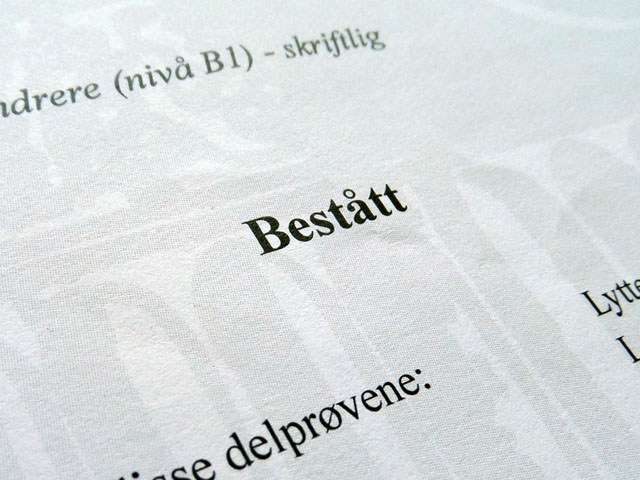 With all that said, speaking Norwegian on a regular basis is still a challenge. Not because of the skills that I lack but because of how self-conscious I feel when doing so. Words can come slowly and hesitantly. Sentences can sound mangled and I often wonder if I’m making any sense whatsoever. But I find Norwegians to be very forgiving about my occasional butchering of their language.

As difficult as it has sometimes been, struggling to learn Norwegian and find my place in a new country, I keep in mind that it’s all part of this wonderful adventure I’ve set myself up for. An adventure that keeps serving up new challenges and that I look forward to every day.

Thank you Sandra for this insight into language learning, as well as a fascinating look at a culture I admit I know very little about.And well done on your success with Norwegian! I have been extremely lucky and haven’t had to try and master a new language since we lived in Venezuela and I had a stab (a bad stab) at learning Spanish. Have you had to learn a new language? How easy has it been? Have you managed it – or given in and resorted to sign language or waving your hands around a lot and shouting loudly?