So how do you process something like this morning? Despite having that sinking feeling in my stomach just like I did with Brexit, it’s hard to make sense of what happened. We all knew it was a possibility but the reality seemed so completely beyond our understanding that we just switched off from it. Or we didn’t think about what it actually meant. But here we are, waking up to this strange, new, back-to-front world we live in.

I was out this morning with some American friends who I can only describe as shell-shocked. Oh yes, I know that feeling well. For me it really is 24 June all over again. Going to bed feeling optimistic, the polls looking good. Waking up to – what?! Has this actually happened? In truth I woke at 3.45am and looked at my BBC news app. I could already see results coming in – and that it didn’t look good. It was early days, people kept saying. Exit polls showed Clinton had it in the bag. But there was nothing overwhelmingly in her favour – it was all way too close, going to much in Trump’s direction.

And I knew, I knew then what was about to happen. I knew because we are five months ahead of the US. We have had five months to get used to this new world order, the anger and the post-truth politics. The total denial of anything that makes any sense. The refusal to admit they don’t have an argument or reason. They just want….what? Something. Something intangible – change? Their identity back? To feel like they still matter? I don’t understand it but then I am someone who doesn’t see people who are different to myself as something to be scared of – I welcome them. I love diversity and think we can only learn from others who come from a different place, have a different outlook on life or live a different way.

So I knew that this poison that has infiltrated our shores has reached America too. Why wouldn’t it? We are all part of the same globalised society now. We bounce off each other constantly, we read the same information and watch the same programmes and hear the same lies from the same sorts of people. With my American friends we discussed which was worse – Trump or Brexit. To them, understandably this soon after an unexpected win for Trump, nothing could be worse. But for me I feel that at least they get another election in four years time. We are (possibly) stuck with Brexit forever.

But in the end actually it doesn’t matter which is “worse” because they are both part of the same thing. Brexit, Trump and just as scarily the rise of right-wing parties in Europe. We are all heading in the same direction and at the moment I feel powerless to know what to do about it. I am having to defend my liberal values against people who now think it is ok for men to say what they want about women, it is ok that Muslims should be targeted and expelled from their home country, it is ok to cheer at the notion that all Mexicans are rapists. Many people who voted for Trump will say they are not racists or misogynists, that they were voting AGAINST something as much as FOR it (just like in the UK) – but in so doing they have enabled the hatred to rise. They now need to own it. If they really meant they didn’t vote for that then they damn well need to condemn it every time they see or hear something they don’t like. Because the small majority of people who really do believe these things are on the up and they are not going to go away.

So anger and confusion, Americans like us Brits will now be stuck in the culture shock cycle of this new place they arrived at this morning. You will be stuck in it for a while but I hope that you get some sort of clear direction at some point as to where you are going.

In the meantime I have no idea if this will help at all but just something I wanted to share. As I stood outside our gate this morning with our dog, having just put the children on their school bus. I saw the garbage man rummaging through next doors bins. He found some old, flat Coca Cola in a bottle and drank it. He found some wrecked, filthy trousers and neatly folded them up and put them aside. He then put all the rubbish back in the bin and moved on. He probably has no idea there has been an election in the US, nor who Donald Trump is. All he cares about is where to get food from. Yes things are awful right now and I feel pretty wretched but for 90% of the world life will go on just as before. We are all terrified for our future but at least we don’t have to go through bins just to find food.

Wherever you are in the world, next Wednesday morning is going to be an interesting one. Whether you stay up late or get up early, whether the results come in for you in your time zone at breakfast, lunch or dinner, we are all going to be be focused on one thing. And I can tell you from our experience of Brexit, it is not going to be pretty.

Above all else I hope with every core of my body that the worse doesn’t happen. And by that I mean of course the worst would be if women-hating, xenophobic, climate-change denying and quite fankly terrifying Trump is elected. I believe that would not only set the US back decades in social policy but would put the entire world at risk. But almost as bad would be a slim win for Clinton – because I don’t believe Trump and his rabble rousers will simply sit back and accept the result. And it could go on and on and on…. 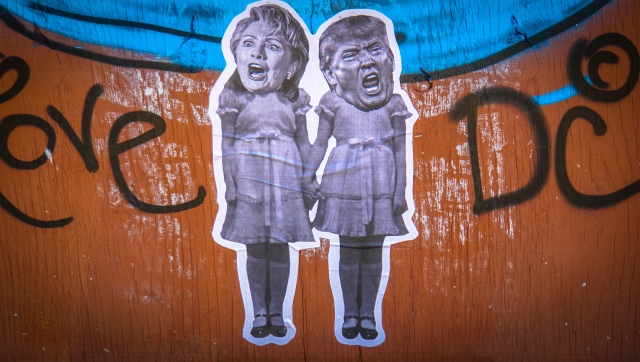 And while it rumbles on, the hatred being spewed out across the internet will get nastier and nastier and nastier. Because now this election isn’t just about he delegates, it isn’t just about the horrific campaign that has been run by Trump to villify Clinton or about some emails that Clinton didn’t handle too well. No, in a way they have become the side show. What it has become about is the horrendous, malicious abuse that this election (just like Brexit) seems to to have legitimised. While Stateside is is now apparently ok to call for a presidential candidate to be not just jailed but murdered, over in the UK internet trolls are calling for the rape and beheading of a woman (Gina Miller) simply for daring to ask the law to clarify how we leave the EU. And worse – then accusing our judiciary of being traitors for simply doing their job.

Where this will end I have no idea. I am frankly terrified. I have two children and they are coming of age in this climate. Social media is rampant – totally out of control, as is our so-called free press which at the moment appears to basically be running the country. If anyone can come up with a way to put the genie back in the bottle please let me know!

But in the meantime for all you Americans wondering how you will feel next week, I can only tell you to prepare yourselves mentally for the worst (and then hope it never happens). I wrote about how I felt after Brexit and I suspect many of you will go through something similar. It is like culture shock although for us Brits is is hard to move on in the cycle because we have no idea what is coming next.

I only hope that by going through the worst case scenario in your head you may be able to limit the damage to come extent. I honestly think Brexit was such a shock because we didn’t really expect it to happen. I know I did have some inkling it might because I was awake every night in the weeks leading up to the vote worrying about it. But I don’t think I had any idea quite how bad it would be – and that nearly five months on we still wouldn’t have a clue where we were headed.

So prepare for the worst and hope for the best. The next week is certainly going to be a roller coaster so make sure you have your seat belts securely fastened. I’ll see you on the other side!